KEEPING AHEAD OF UNEXPECTED RULE CHANGES

While everyone is trying to adapt to these new and challenging times, for some sports it is not just the pandemic posing challenges for them but also new rule variations. For a variety of reasons, sporting rules are in a constant state of flux and evolution at present. With recent examples such as VAR in football, seemingly regularly changing tackle laws in Rugby Union or the introduction of the Black Card in Gaelic Football; these rule changes have been signposted well in advance giving coaches and teams time to prepare and plan accordingly. In the case of Rugby League’s Super League, and Australia’s Super Netball however, teams will be competing in very different landscapes but without adequate preparation.

Rugby League’s Super League have introduced a raft of changes to their Laws as part of their return to play protocols, with the most talked about being the abolition of scrums and adopting the ‘six again’ rule, where the bulk of ruck infringements are penalised by restarting the tackle count and not a penalty.

While the removal of the scrum is intended to reduce unnecessary close contact in games it also simultaneously removes completely any set piece moves for backs following a scrum which coaches and teams would have worked on during the off-season.
Furthermore, the ‘six again’ rule provides teams deep in their own territory with more reason to play cautiously with crash ball runners seeking to win a penalty and tackle reset than attempting a risky offload. These are not intended per se as criticisms, but rather an assessment that the game that coaches and scouts have prepared for and built teams to compete in, is in the short-term going to take on a very different outlook.

The ‘six again’ rule has already been implemented in Australia’s NRL, but North Queensland Cowboys coach Paul Green has warned that the rule could provide attacking sides with too much of an advantage:

I think the bar for that ruck infringement is getting lower and lower. They’re really looking for them now and I think they do have a massive impact… [referees] are a little bit trigger-happy with it at the moment and because the game flows on too, you don’t get the chance to stop and at least ask what we’re doing wrong.”

This means in effect Super League sides have prepared for, and started a season in a sport which has shifted some of its anchoring principles, which will obviously add another layer of complication to the restart.

The world’s leading Netball league has introduced a ‘2 point Super Shot Zone’, which gives Goal Attacks and Goal Shooters the chance to score two goals rather than the traditional one by shooting from a 1.9m designated zone within the goal circle – but only in the last 5 minutes of each quarter. 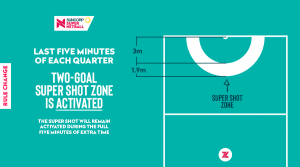 statistical analysis of the first three seasons found that close to 90% of goals scored during Suncorp Super Netball matches were within three metres of the goal post… we want to encourage this spectacular element of our game.

For coaches and players, this new rule represents a significant challenge with only 6 weeks between its announcement and the beginning of the 2020 season on the 1st of August. With no substantive data to utilise, there will be a difficult decision to be made around the merits of going for a more difficult 2 point shot, over the comparatively easy single point shot that elite Goal Attack and Goal Shooters have trained their entire lives to make.

While it is a touch simplistic to compare Netball and Basketball, an interesting comparison can be seen with the introduction of the 3 point line in the NBA. While intended to increase scoring and entertainment, it has become a source of contention in the game. As this interesting video shows, rescoring and erasing the 3 point line made nearly no difference to the outcome of the 2015-16 NBA Playoffs – with 13 results remaining the same, 1 changing and 1 games result proving inconclusive. By extrapolating this example, coaches may deem the risk/reward to be unbalanced.

HOW KAIROS CAN HELP

With such flux in the very fabric of these sports, it is more important than ever for elite sports teams to be provided with clarity on game day. Thanks to our scheduling, communication and player engagement platform, athletes can now be perfectly prepared and ready to perform on game day. We are uniquely placed to help clubs navigate the opportunities and challenges that lie ahead.

To find out more about how Kairos can help your team drop us an email at info@kairostech.io, or simply get in touch below.